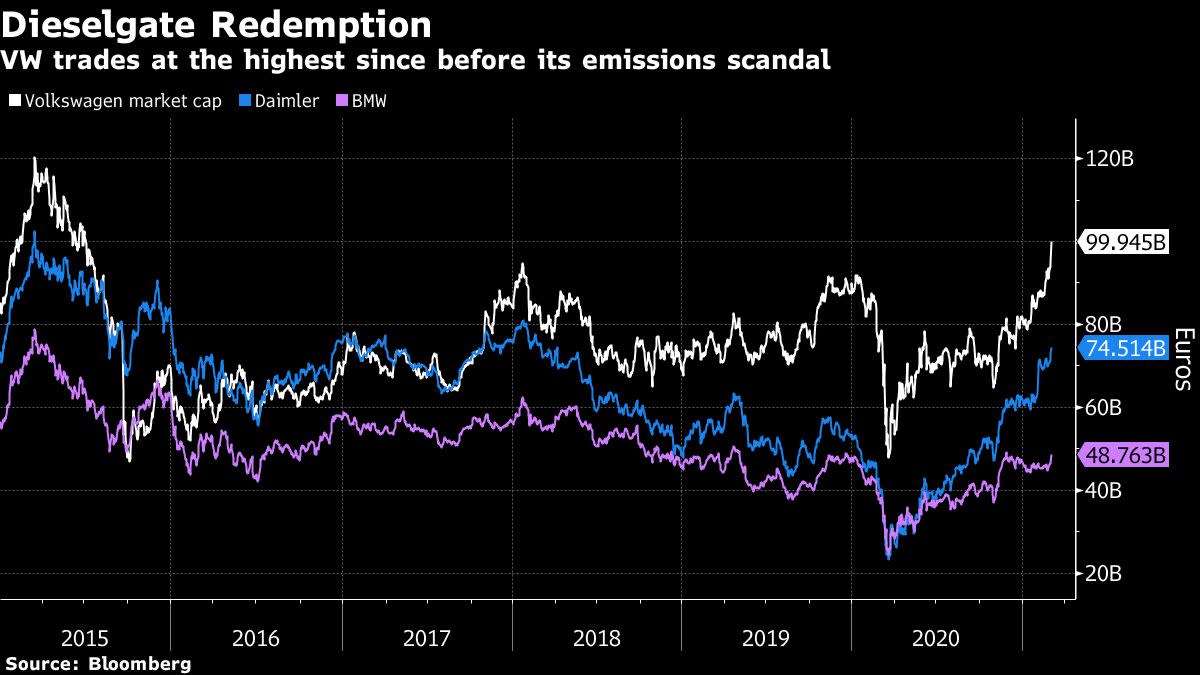 (Bloomberg) — A teardown of Volkswagen AG’s first dedicated electric vehicle found it measures up favorably to Tesla Inc. models in several key aspects, sending the German carmaker’s shares to levels last seen before its diesel emissions scandal.The deep dive into the ID.3 by UBS Group AG analysts found the platform underpinning VW’s EV models will be fully cost competitive with Tesla and boast best-in-class energy density and efficiency. Analysts led by Patrick Hummel called the car “the most credible EV effort by any legacy auto company so far.”VW common shares climbed as much as 5.6% to 209 euros, the highest intraday since July 2015, the month that eventual Chief Executive Officer Herbert Diess joined the company from BMW AG. UBS raised its price target to 300 euros.UBS’s assessment is the latest positive development for an EV that got off to a bumpy start last year. Production hiccups, software glitches and disruptions related to the Covid-19 pandemic plagued the ID.3 launch and cast doubt over the ability of traditional automakers to field products that can compete with Tesla’s Model 3.“The market has been waiting” for VW’s battery-electric vehicle production to ramp up, and for “proof points,” Diess tweeted Wednesday. “So here we are.”VW is primarily targeting Europe with the ID.3 hatchback and flanking the car with a crossover sibling, the ID.4, that will be produced in China and the U.S., in addition to Germany. VW group brands Audi, Skoda and Seat also will introduce vehicles this year that share the same underpinnings to boost economies of scale. Ford Motor Co. also will license VW’s modular EV platform to make a compact car in Europe, adding additional volume.VW plans to at least double the share of its sales that are fully electric this year to between 6% and 8%, suggesting it might narrow the gap with Tesla by boosting deliveries to roughly 700,000 cars. Tesla expects to hand over at least 750,000 vehicles in 2021.“VW might not be the Apple, but the Samsung of the EV world, with profitable, high-volume EV brands,” UBS’s Hummel said. He estimates the ID.3’s gross margin is around 15%, “already almost on par” with VW’s combustion-era Golf model.(Updates with CEO’s tweet in the fifth paragraph.)For more articles like this, please visit us at bloomberg.comSubscribe now to stay ahead with the most trusted business news source.©2021 Bloomberg L.P.

Previous ArticleElon Musk Is Building The 2nd Manufacturing Factory in Austin for SpaceX
Next Article The Tesla Mafia: How Elon Musk’s Ex-Employees Are Becoming His Top Rivals | Forbes