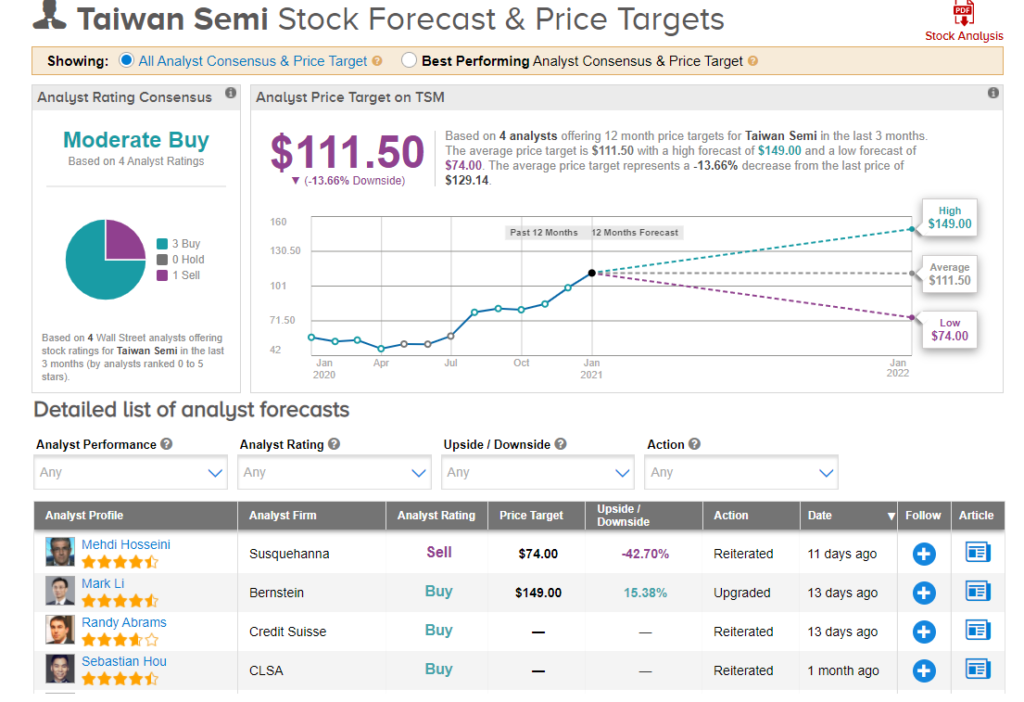 Shares of Taiwan Semiconductor Manufacturing Co. (TSMC) dropped 3.7% on Jan. 22 after Bloomberg reported that its competitor Samsung is planning to build a chip-making foundry in the US. According to the report, Samsung is looking at investing more than $10 billion to build the chip-making foundry in Austin, Texas. Construction is expected to start this year and operations could begin in 2023. Over the next decade, Samsung is planning to invest $116 billion in its chip fabrication and foundry business, according to the Bloomberg report. The report about Samsung’s plans comes after TSMC (TSM) in May last year, had announced plans to build a foundry in Arizona using its 5-nanometer technology for wafer fabrication. The chipmaker had said that it expected to spend $12 billion on this foundry from 2021 to 2029. (See TSM stock analysis on TipRanks) TSMC’s 5-nanometer technology wafers are extensively used in HPC (High-Performance Computing Platforms) and smartphones. According to TSMC’s latest fourth-quarter results released this month, its smartphones segment generated 50% of its revenue followed by HPC, which generated 31% of sales. Furthermore, TSMC said that it expects to ramp up its capex from $17.2 billion in FY20 to a range of $25- $28 billion for FY21. Susquehanna Financial Group analyst Mehdi Hosseini, who has a Sell rating and a $74 price target on TSM stock on Jan. 22 commented on the report regarding Samsung and what it could mean for TSMC. Hosseini said, “We find Bloomberg’s article, highlighting Samsung’s intention to build a new leading edge fab in Austin, TX, is consistent with our commentary following TSM’s earnings report and guide. We noted then that part of TSM’s massive capex guide of $25-$28bn is because of increased competition from Samsung and certainly not because of outsourcing of MPUs [microprocessing units]. Bloomberg’s article, in our view, underscores this increased competitive threat.” Overall, analysts are cautiously optimistic about the stock. The Moderate Buy consensus is based on 3 Buys and Hosseini’s Sell. The average price target of $111.50 implies 13.7% downside potential to current levels. Related News: Wabtec Secures Order From Singapore Mass Transit DraftKings Rolls Out Online Sportsbook In Virginia Ahead of Super Bowl United Airlines Posts Wider-Than-Feared Loss of $1.9B In 4Q; Street Says Hold More recent articles from Smarter Analyst: Taboola To Go Public Via Merger With Ion Acquisition Corp. Clorox Achieves Renewable Electricity Goal Four Years Earlier Than Planned Monday’s Pre-Market: Here’s What You Need To Know Before The Market Opens Merck Stops Covid-19 Vaccine Program Due To Disappointing Data