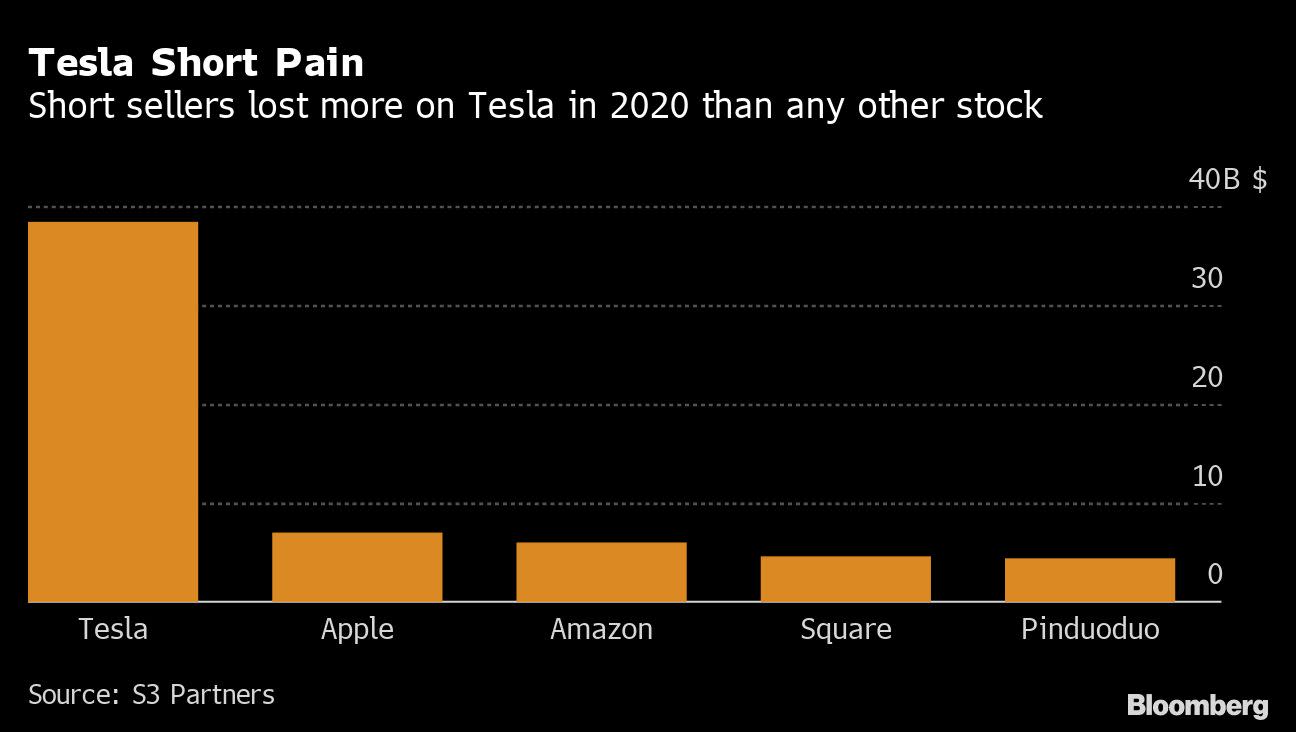 (Bloomberg) — Tesla Inc. short sellers lost billions more on the electric-vehicle maker than any other company in 2020, as bears got severely burned by the stock’s surge to new highs.With shares up 730%, Tesla bears have seen more than $38 billion in mark-to-market losses this year, according to data from S3 Partners. By comparison, the next-biggest loss for short sellers was on Apple Inc., at just under $7 billion, S3 data shows.This “is not only the largest mark-to-market loss for any stock this year, it is the largest yearly mark-to-market loss I have ever seen,” said Ihor Dusaniwsky, a managing director at S3 Partners.Tesla didn’t respond to a request for comment.For now, the electric carmaker and its investors, small and large, have the upper hand against a group of short sellers that have come to be known as TSLAQ — Q being the character exchanges tack onto a stock ticker after a company files for bankruptcy.Those short sellers include some high-profile names such as Jim Chanos, president and founder of hedge fund Kynikos Associates. Chanos recently reduced the size of his trade, telling Bloomberg TV early in December it’s been “painful.”Read more: Chanos Reduces ‘Painful’ Tesla Short, Tells Musk ‘Job Well Done’Many of Tesla’s short sellers have closed out their positions over the course of 2020, with short interest falling to 6% of the float from nearly 20% a year ago, according to S3 data.“The short squeeze has been going on all year. It’s been an angled straight line down,” Dusaniwsky said. “The big thing about Tesla as opposed to any other stock is that the vast majority of retail shareholders will never be sellers. They love the stock, they love the car, they love Elon Musk and they are adamant long shareholders.”Tesla’s shares soared this year as it notched five consecutive quarters of profits and amid growing sentiment on Wall Street that the shift toward electric vehicles is accelerating. The company was added to the S&P 500 Index on Dec. 21 and several smaller EV stocks have rallied along with it.The next potential catalyst comes in early January, when Tesla reports fourth-quarter vehicle production and delivery figures. Tesla expects to deliver half a million cars in 2020, a huge milestone for a company that initially struggled to mass-produce its Model 3 and is now building additional factories in Berlin and Austin, Texas.“Tesla checks a lot of boxes for investors in terms of people wanting growth, disruption, electrification,” said Dan Levy, an analyst at Credit Suisse. “They operationally had a good year, but there are also broader trends in the market as well. There was clearly more interest in shorting the stock before 2020, and then 2020 knocked out a lot of shorts.”In July, Chief Executive Officer Musk tweaked the noses of Tesla critics by selling limited-edition red-satin shorts with the company’s logo — or what he called “short shorts.” Fans have posted pictures of themselves wearing them as Tesla’s stock has rallied, and Musk tweeted a picture of a pair as a Christmas greeting.Musk, who with an 18% stake is Tesla’s largest shareholder, has seen his own wealth balloon this year. He’s now the second-richest person on the planet after Jeff Bezos of Amazon.com Inc.For more articles like this, please visit us at bloomberg.comSubscribe now to stay ahead with the most trusted business news source.©2020 Bloomberg L.P.